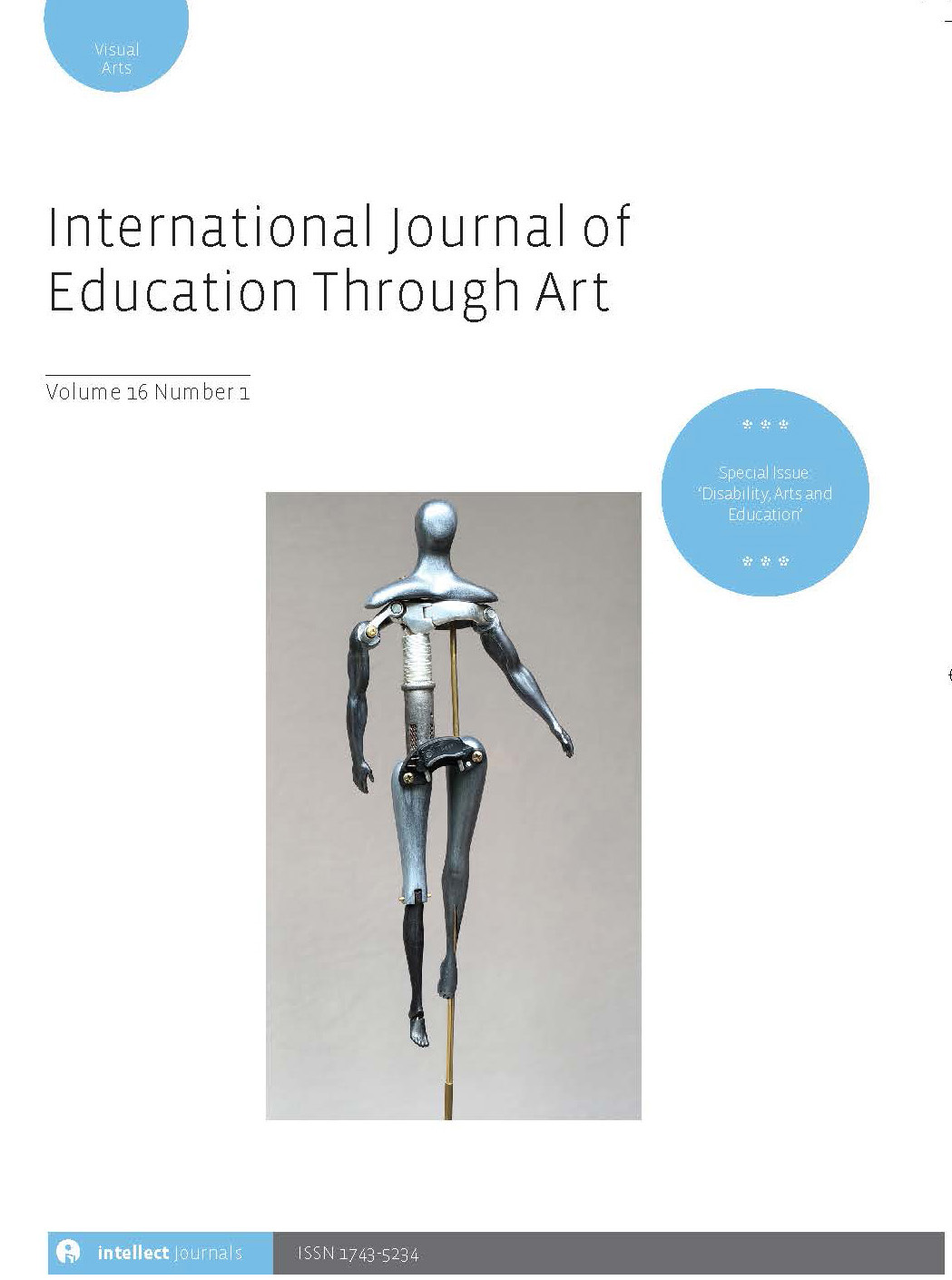 Disability studies as a site of knowledge in art education

Towards a vital pedagogy: Learning from anti-ableist practice in art education

Art education has the potential to promote inclusive education for all children and young people. However, the pervasive discourse of special education, with an emphasis on individual deficit, support and remediation, can dominate our thinking about the relationship between disability and art education. This article reports on an attempt to resist the limitations of such discourses by introducing anti-ableist, crip theory to art educators (n=48). Visual and textual storyboards enabled practitioners to present, reflect and revise projects from a committed anti-ableist position. Modified projects reflected an awareness of the benefits of multi-sensory approaches, the advantages of interdependency and a greater resonance with contemporary arts practice. Acknowledging the challenges of taking theory to practice, the article suggests that anti-ableist theory can promote a vital pedagogy in art education. It concludes that crip theory can provoke practice-based resistance to deficit-based models of disability.

In this article, we, as disability studies educators in Toronto, Canada, reflect on our interpretations of a student group’s call to ‘people’ disability culture. This request tasked us with mapping disability culture in Canada, and representing it through

culture. Here, we describe how our work supported and transcended the affirmative model by drawing on intersectionality and Disability Justice. We critically consider the aesthetic and representational tensions of producing films under crip time. Through this writing, we reflect on the three-year process of filmmaking as a gesture of online pedagogy and analyse three out of five films.

Engaging, validating, imagining: A comic-based approach to (non)participation and empowerment

This article engages with art education and disability justice through a story narrated using comics. Lorena’s Story is a short graphic narrative that explores the complexity of taking responsibility for (non)participation during a participatory animation workshop for children and young people with disabilities. The story inspires a reflective process that questions the model of empowerment present in participatory video literature, validates the diverse ways of being in the world with disabilities and inspires a different notion of empowerment. Within arts-based educational research methods, the comic story is a site of knowledge that aims to provide a sense of integrity, sincerity and authenticity.

How do disability arts (dis/arts) and culture rupture and transform conventional artistic and a/r/tographic practices? We show how disability arts and culture involves a multiplicity of voices unfolding, recursing, rippling and reflexively performing

public pedagogy to make the Wingspan retreat of artists and scholars. We revisit both Hofstadter’s formalistic and ahistorical conception of recursion and Irwin’s a/r/tography to ask how artistic practices and genres reflexively transform. Our research foregrounds disability collectivity without forsaking individuality, fragilities, strengths, differences of disability that require accommodation and communication beyond the binaries of ability/disability, and, purported ‘normalcy’ and ‘irregularity’. This article artistically and intellectually plays both with the unfolding of a/r/tography as recursive processes often in tension and contention with discourses of ‘ability and ‘normalcy’ that so bind who counts as valued human beings (or not) and whose semiotic excesses matter. Recursive transformations may become larger sociocultural movements of disability politics and collectives with history, agency and polyvocality. To respect such differences and yet exceed them in the span of wings is the provisional and mighty task of the disability arts, culture and public pedagogical movement.

Autism and outsiderism: The art of George Widener

Until recently, Outsider Art has escaped the examination that has been given other colonialist labels, such as Orientalism and Primitivism. Contemporary artists, such as George Widener, who slip in between mainstream and Outsider artworlds, pose lingering questions about this category. As an autistic artist, Widener also upends the misrepresentations about the spectrum in both the artworld and art education. I suggest that although Widener does not serve as a representative of the autistic or Outsider Art communities, he does serve as an example of entrenched notions of art and disability in these worlds. In this article, I ask how labels might be discarded so that we can enjoy artists who tell us about the neuro-diverse interior of individuals. Removed from outwardly imposed categories, we might re-imagine art in society and art in schools.

Splashes of light: Parents of children with dyslexia explore experiences through visual arts

This article examines the critical disability praxis grounding a research study that explored the lived experiences of parents of children with dyslexia through in-depth interviews and arts-based focus group. The participants engaged in visual arts practices to create provoking images of the issues facing themselves or their families. This multimodal experience became an opportunity for the participants to raise awareness of the needs of families with learning disabilities. This article focuses on two parent artists who created visual pieces that shared a thematic focus on darkness and light. Both pieces contribute to a deeper understanding of the challenges and difficulties that these parent-artists encountered, but also gave them the opportunity to voice the more affirmative and empowering aspects of their experiences.

The purpose of this study was to assess the impact of inclusive postmodern visual arts education for students with emotional disabilities (ED) in the area of social interaction development. This research focuses on the ability of students to build

art skills and change social interaction skills through constructivist pedagogical approaches. Mixed-methods case studies were implemented over a period of two semesters with three students, three teachers and two high schools in the United States. Pedagogical approaches that emphasized student interaction and personal choice allowed students to effectively interact with peers and led to student engagement. The findings from this study indicate that over time the students in visual arts developed fluency and skills in artmaking, which led to confidence in their work and better peer relationships.